So, you might as well add an apple to my daily eats because I just devoured one while waiting for my pics to load...Anyways, I need to get studying for my math test tomorrow, but that can wait...right?!

By the way...what happened to yesterday? I don't know! I do know that I got my salad though! ;)

So long story short (or sort of short) ...I bought a new coffee mug from Starbucks after my pink dotted one spilled all over my bag and I threw it in the trash in anger. However, my new Starbucks Coffee Mug hit the trash after about 3 days because it had a double-walled feature that was supposed to keep the contents extra warm or some nonsense...Umm, actually it just acted as a reservoir for some of my coffee. That's right, my coffee/milk was collecting in between the walls and that can't be good to drink out of! THEN I bought an $18 stainless steel one at Starbucks and by the time I got home, I was like...Why in the heck did I just spend $18 on a coffee mug...this is turning into the $50 coffee mug! SO I put that mug aside to be taken back ASAP and called my mom to send me my old stand by that I forgot at home, which has never let me down. Stick with what you know peeps!

The moral of that story: I won't have a coffee mug until that package gets to me...(Is that a moral?...hah!)


Okay, so POM ICED COFFEE Cafe au Lait is just darn impressive. The ingredient list is short as can be (Reduced Fat Milk, brewed Rainforest Alliance Certified Coffee, POM Wonderful Pomegranate Antioxidant Extract, organic cane sugar and natural caffeine), containing only 20g of sugar (most coming from the natural milk sugars) and 7g of protein! The flavor is just as deep and rich as the Starbucks Frappuccino Bottled Beverages, plus you get antioxidants! If you see it on the shelves...grab it!!! :D

I drank half of it yesterday, so this morning I filled the remainder of the bottle with some skim milk and the coffee flavor was just as prevalent as ever (this is a great money saving tip!). Yum yum! A Kashi Raspberry Chocolate Bar and a dalmation of a banana rounded out my morning. 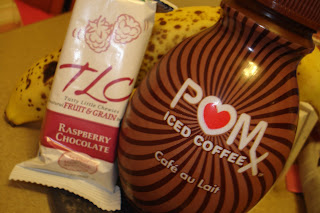 After a little Math action, Alexa and I went to the Boar's Head Sandwich Shop (our favorite treat!). I got Turkey, Tomatoes, Black Olives, Green Bell Peppers and Lettuce in between two amazing slices of WheatBerry bread! Nom, nom nom. 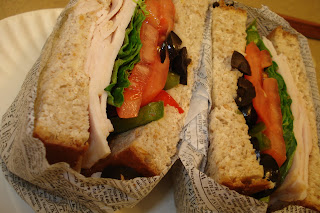 As we were walking back upstairs, I felt the urge for something sweet and went with some Snackwell's Sandwich Cookies...only $.52 at my school's c-store! :D 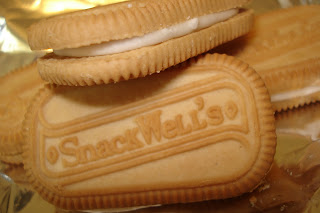 And I also had about 1 serving of Pretzel Snaps (the last of the bag...and I'm not buying any more! lol) while watching a little Full House. (I know you still watch it from time to time!) 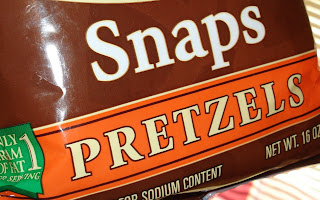 After a 3 hour Food Science class, I needed some fuel for my lovely Chem test (which I just finished about an hour ago...I think I did well, but let's not jinx it!). SUNSHINE BURGERS! Okay, so this is my first post about sunshine burgers, but it is my 3rd time to eat one. I was graced with some coupons from the company a while back and just got around to finding them.
BOY O BOY are they worth the hunt.
I am not sure I will ever eat a Boca Burger again! 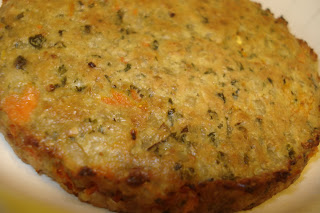 My munchies got the best of me and a baby bag of Snyder's PB Pretzels made their way into my mouth (about half way through, I realized this was my 2nd Snyder's Snack today!).
More Beautiful You...If you have not heard that song, go download it right now. 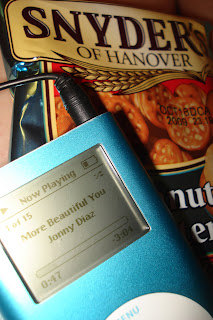 And a Cheese Stick finalized my typical college "dinner" of sorts...
The disturbing thing is that I knew the answer to that question...and I haven't watch Spongebob in...well, A LONG time! haha

Time for math! Tommorrow is another busy day, but I know what will make it better...(of course, it's food related!)
GIVEAWAY TIME
(don't you just love hearing that?!)
Stevia anyone?
Check out the Carolina Pad...
at 8:38 PM